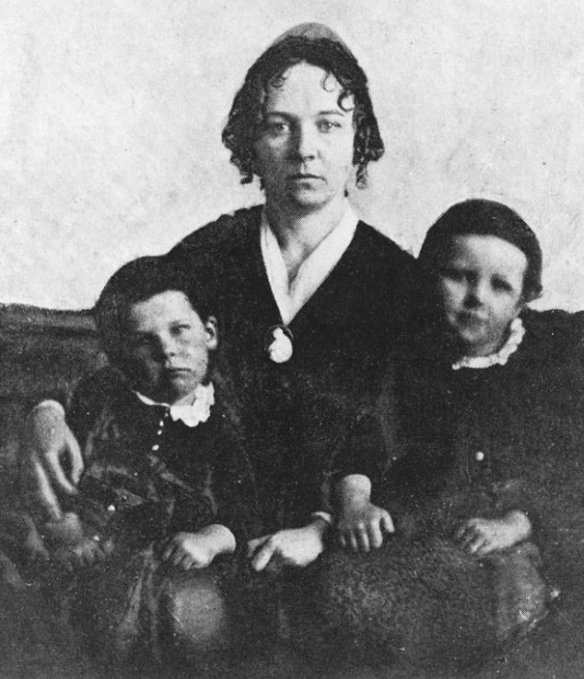 This week’s episode of the Washington Post series Constitutional is titled Gender.* It’s hosted by Lillian Cunningham, with guests Library of Congress historian Julie Miller and Feminist Majority Foundation president Ellie Smeal.  This episode traces the fight to have women recognized by the US Constitution, allowed to vote, and then to be recognized as equal to men. It’s an excellent episode, informative and interesting, with some very early history that I had no idea existed. I encourage you all to listen to the podcast or read the transcript.

But the commenters also feel the need to critique the early suffragettes’ looks and fashion choices, which, to be fair, is a standard part of the discussion when the suffragettes come up. But, really? Do we mock Abraham Lincoln’s and Ulysses S. Grant’s looks and weight every time they come up? As female professionals, couldn’t these podcasters have taken a different approach?

No one can mention Elizabeth Cady Stanton without mentioning her weight and her hair. Today, it’s outrageous to these feminists to think that a fat woman, who kept getting fatter, and bore 7 children, OMG, could have intelligent, radical thoughts and not only act on them, but lead an entire movement! Not only that, but Elizabeth had the audacity to actually get old, and look it. Thank goodness that the attitudes about women’s weight and age that are imposed on us today didn’t hold women back in those days. Elizabeth didn’t feel the need to stay home with her 7 children and hide until she’d lost 100 lbs. People didn’t feel that they shouldn’t respect her ideas because of her weight or age. Unlike what would happen today, she was given the respect and attention she deserved for her fighter’s spirit and articulate, revolutionary mind.

Even though Lucretia Mott was thin, they marvel over her plainness, since she was a Quaker, who thus dressed simply, in the manner of her religious denomination. Yet, she didn’t become an invisible, ugly woman, only useful to society as some kind of utilitarian tool, the way plain women are made to feel today. She also led a movement that changed our nation and women’s lives.

In those days, before the advent of mass media, people read each other’s ideas. Changing one’s looks to appeal to the male gaze hadn’t become a necessity for getting one’s ideas accepted on a mass level yet. Photographs were still rare. We weren’t a disposable society as incredibly focussed on materialism and looks as we are now. So, while women had fewer rights, they also didn’t have to have their breast size changed, or their teeth whitened, or their hair dyed, or starve themselves, in the hope that they would be taken seriously, even by each other. Men didn’t either.

When they’re done with Elizabeth and Lucretia’s looks, they go through their accomplishments, eventually reaching one of tumblr’s favorite subjects: The “racist” attitudes of Elizabeth Cady Stanton. She is a complex figure to be sure, but she shouldn’t be taken out of her historical context. She was angry, she had been fighting for women’s voting rights for decades, and had been denied them based on certain reasoning that started with the Founding Fathers. She had also been an abolitionist for even longer than she had been a women’s rights advocate. She had been betrayed by former ally Frederick Douglas, who now felt that, while black men should get the vote, it was unnecessary to fight for women, potentially at men’s expense. By his way of thinking, women were already represented by the men in their lives, and that would hold true for black women as well.* I can’t imagine why she would be angry and unsatisfied with that, after she’d spent her life as an abolitionist and had suspended the suffragist movement to aid in the Civil War effort, so that slave owners would no longer vote for the interests of black men and women.

She was working to get ALL women the vote. Former slave and tireless women’s rights activist Sojourner Truth took her side, as did other suffragettes who had also been abolitionists. Are we supposed to believe that they had all suddenly become racist? That makes no sense. They were angry at the betrayal of the abolitionists and former slaves who had been their friends and allies.

These supposedly racist sentiments were really Elizabeth arguing with men by throwing back at them the arguments that had been given to keep women from voting. Women were told they weren’t allowed to vote because they weren’t wealthy enough, educated enough, smart enough, couldn’t handle the responsibility, or would upset the social order. Blacks/slaves had been described the same way, by the people who were allowing neither to vote. How were poor, abused, uneducated black men somehow now more qualified than middle class, educated, white women?

That’s not racism, it’s a logical argument. Women had been told they were unintelligent and inferior for their entire lives, just like slaves. Now, suddenly, she was told that male former slaves were no longer inferior, but females of every color, every social strata, were. She argued that it wasn’t fair for black men to jump the line. You may not find her wording noble. You may not find my defense of her noble. It wasn’t noble for our country to continue to deny her and Sojourner Truth the vote. Our country creates these resentments and this sense of competition among groups because we aren’t equal. We fight over the scraps that the powerful few dangle over our heads.

Now that groups other than white men have gained a substantial amount of ground, even white men feel competitive with other groups about things they used to consider their automatic privilege, like jobs, education, and political power.

It was 150 years ago, and Elizabeth used the language of her time, which sounds more racist to us today than it did then. But the lack of support for women and their issues continues, and still matters, even down to women often failing to support each other. Look at these women, judging the weight of one of the most influential women of the 19th century, a woman who every woman in the US owes a debt of gratitude to. What could matter less than her weight or her hairstyle? Her long life and many accomplishments argue that it didn’t matter a bit.

*Yep, it’s about women’s history, but it’s called “Gender.” I can’t even. Who are these mysterious people known as “Gender”? Are they the ones that convinced the feminists to mock their icons and judge them out of context? To discuss their fashion choices before their contributions to history? To judge them for getting old?

**This was a popular argument at the time, as this historical pamphlet urging men to vote no on women’s suffrage shows. It even includes helpful, propaganda-laced cleaning tips for the wives, to make sure they know their place is on their knees, scrubbing up the men’s dirt. A lot like a slave. (Ha! Bonus 19th century media critique!)

ETA: Comments have been disabled for this post. I posted this on our Metawitches site, as well. Over there, it took less than 12 hours for actual racists to find it and start high fiving me. This isn’t my first rodeo and we’re not going there.

White feminists aren’t racists when they fight for their own equal rights. They aren’t racists when they expect reciprocity from the other marginalized groups they’ve helped fight for equal rights. They are normal, human people expecting the people around them to follow the established rules for a social contract in our society. But, women are generally expected to accept less than their share in any contract, and to be passive when they are cheated, so when we complain and stand up for ourselves instead, we are labelled with all manner of insulting names, which then stick to us for the rest of our lives, and throughout history.