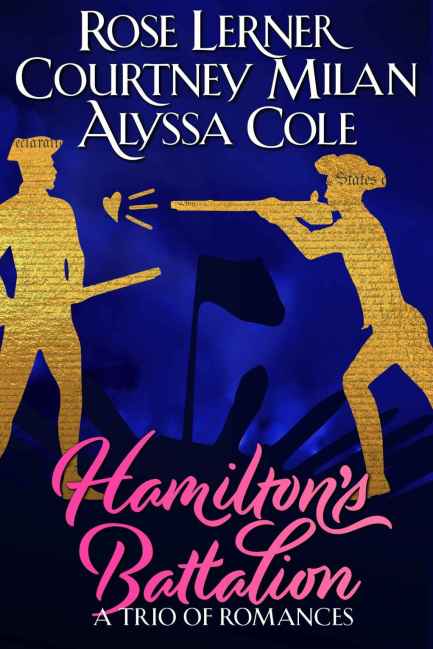 Hamilton’s Battalion is a collection of three historical romance novellas, one from each author, each having some connection to Founding Father Alexander Hamilton and the siege at Yorktown, VA, which turned the tide of the Revolutionary War. The lead couples in the stories are diverse by design, as the authors were inspired by Lin-Manuel Miranda’s musical Hamilton, and set out to explore the ideals that our country is meant to embrace. While they never forget that they’re romances, the novellas explores issues dealing with class, race, religion, gender roles, and sexuality.

The theme that binds the three stories together is the struggle to attain freedom and the full rights of citizenship. The backdrop is the war to free the colonies from Britain, but the characters are also concerned that winning the war won’t guarantee that they and their loved ones will be free or safe. They work in the hope of creating more opportunities in the future for people like themselves: married and single women, Jewish men and women, gay men and women, former slaves and all black people, but especially unmarried, free black women.

As a frame for the book, Alexander Hamilton’s devoted widow Eliza is writing a memoir of his heroism during the Revolutionary War. She gathers every possible story about him from every living source she can find. Two of the couples were at the siege of Yorktown. The third is about the granddaughter of a veteran, who tells his story to Eliza and her secretary. Alexander, Eliza and Angelica are a small part of each novella.

I picked up this book since it’s Courtney Milan’s latest, so it should be no surprise that her story is my favorite. I was looking for a light but intelligent read after reading several darker books in a row. Courtney’s romances always deliver on that front. Her stories are original, her lovers come in a variety of shapes, sizes, ethnicities, personalities and sexualities, and her characters are engaged in more with their lives than just being English aristocrats or cowboys. They are botanists, publishers, suffragettes, and chess prodigies. And that’s just the women.

In The Pursuit of… a taciturn former slave and a jovial, talkative, runaway British officer undertake a 500 mile journey together on foot. They tried to kill each other the first time they met in battle, and they may yet over the course of the long walk. Unless they do the opposite and fall in love. It’s a lively journey, with two appealing main characters, many a tall tale, and lots of bad cheese and squirrel stew. Did I mention that Courtney has a great sense of humor?

That Could Be Enough by Alyssa Cole tells the story of Mercy Alston, Eliza Hamilton’s prim and proper secretary, who’s hidden herself away living in the country with two old ladies for ten years after one heartbreak too many. She thinks she’s done with love until she meets a feisty dressmaker who has other ideas. Andromeda Stiel is the granddaughter of a veteran who fought with Hamilton. She travels to Eliza’s home in his stead to tell his story. Sparks fly as soon as she and Mercy meet, but these two women have to overcome their own stubbornness and society’s prejudices before they can be happy together.

This story is fun and sweet. It shows a side of the life of freewomen in the early 19th century that isn’t often explored. I’d love to read an entire novel based on the community Andromeda lives in. This story was my introduction to Alyssa Cole, and I’ll be looking into her other works.

Promised Land by Rose Lerner is the story of Rachel Mendelson, who fakes her own death so that she can join the army and fight in the war disguised as a man named Ezra Jacobs. Her husband, Nathan, thinks she’s been dead for five years, until she spots him in her unit’s encampment and turns him in as a loyalist spy. While Nathan is held prisoner, rather loosely, as a spy, he keeps Rachel/Ezra’s secret, and the two get to know each other all over again. They married under pressure when Rachel was very young and needed Nathan’s money to pay for her mother’s medical bills. Resentment and a controlling mother-in-law drove her away the first time. Will their marriage work this time, now that they have the chance to form a new relationship on more equal footing?

I enjoyed this story overall, but felt it dragged at times. While I hardly put the other two down from start to finish, I kept dropping this and picking it up days later. This is the one story of the three that spends the entire story with the battle as the present time, and the descriptions of the camp routines and battle prep got old. Plus, Rachel and Nathan both have secrets they work hard to keep. That means they can’t talk freely, which hampers the dialogue. The themes of nontraditional gender roles and loosening religious restrictions during times of crisis (they are kosher Jews) were interesting topics to explore, but they were bogged down by other aspects of the story.

This is my personal opinion, though. The story is otherwise well-written and the characters are well-rounded. Someone who’s more entertained by love on a battlefield might love this story.

I gave the book a 4.5 instead of a 5 because of the slowness of Promised Land, and because a novella is always a little less satisfying than a novel. Promised Land and The Pursuit of… are slightly hampered by the need to use the Eliza Hamilton framing device, which means that there is less depth to the story than a novella would normally have, which is already less than a novel would have. Only That Could Be Enough effectively incorporates Eliza and Angelica into the story.

The book ends with historical notes from each author, discussing their research, sources, and movingly discussing their own family histories with regard to the same issues the characters struggle with. Each has a personal connection to her story that comes through in the writing, making the book especially meaningful. It shows how many obstacles have been thrown in the way of love and romance throughout the history of the US, and the inspiring ways people persevere so that they can be with their loved ones.